This paper was interesting because the authors 1) placed efforts to visualise convolutional layers (which was a kind of a black box) and 2) used this visualisation to find better hyperparameters of the existing architecture, AlexNet. In the abstract, the motivations were articulated as identifying ‘why large Convolutional Network (CNN) work well’ and ‘how they might be improved’, so this paper focuses on the details around ‘how’ and ‘why’ through a good range of experiments.

As ZFNet (Zeiler Furgus Net) seems to be an enhanced modification of AlexNet through investigation of internal operations and behaviours of the model, many characters were addressed in comparison with AlexNet.

How did convolutional layers get visualised prior to this paper?

In the past, first layers tended to be more frequently visualised because outputs could be more easily projected to the pixel space. The optimal stimulus for each unit needed to be found by performing gradient descent so that activations were maximised.

To do so, this required a careful initialisation and made sure it does not give large invariances. This meant that higher layers with greater invariances were considered extremely complex to be visualised.

Why was this paper different from previous visualisation techniques?

Through Deconvolutional Network (Zeiler et al., 2011), this paper visualised features to pixels to map feature activities back to the input pixel space for a relevant layer. There are three components to be understood in deconvnet.

Maxpooling is not invertible, but it can be approximated by recording the locations of maxima, preserving structure of the stimulus. 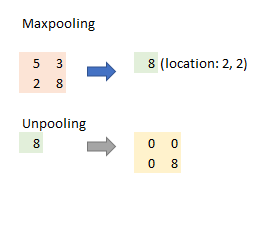 Unpooled feature reconstructions (that are always positive) go through ReLU.

Conv layer uses defined filters to convolve output from the previous input. This could be simplified as:

where @ is matrix multiplication.

Therefore, deconvnet used the transposed versions of the same filters on the output from Rectification above (2. Rectification), which was simplified as:

With these three components of deconvnet, the authors were able to visualise all layers in AlexNet.

What were main changes to AlexNet?

The size of each input, filter, and output per layer is visualised on Excel.

The number below each conv layer, ReLU, maxpool, and fc layer indicates the corresponding line from the codes below. Excel version is located here. 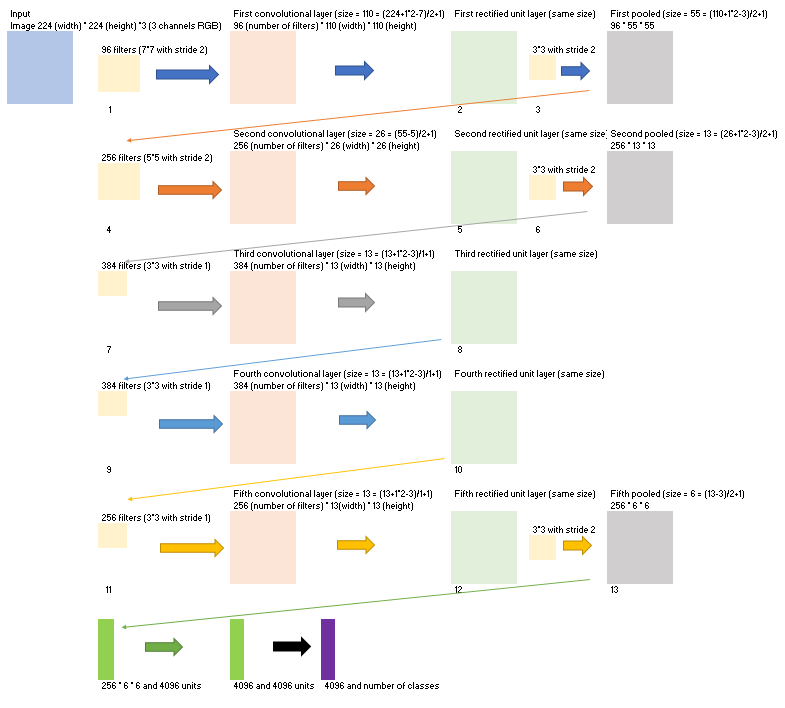 The codes below represent my attempt to create ZFNet through Pytorch based on AlexNet. The full version with an example is located here.

What did we learn from visualisation of layers?

Layer 2 visualised corners and other edge/color conjunctions while Layer 3, 4, and 5 displayed more complex features with larger invariances, such as similar textures and text, class-specific, and entire objects, respectively. I wanted to include the visualisation of layers from the paper here, but I was not sure about the license for these figures. For your information, it is Figure 2. Visualization of features in a fully trained model.

The authors found that lower layers converged within a few epochs while upper layers had convergence after a considerable number of epochs. This indicates that recognising an object/class takes a greater time than simple features.

How did it affect performance when some portions of images are occluded?

Where an object was occluded, probability of the correct class dropped significantly, indicating that the model really focused on the location of the object in an image.

ZFNet reduced Top-5 error rate on the test set by 0.5%, making it 14.8% (6 convnets) compared to AlexNet’s best result 15.3% (7 convnets). Through experiments in changing structures, the authors found that adding a middle conv layer gained in performance whilst adding an fc layer made little difference. Adding both layers resulted in over-fitting.

How did it go with other datasets?

Pascal 2012 images can have multiple objects in an image while ImageNet datasets focus on a single classification per image, indicating images from these two sources are quite different in nature. Potentially because of this, the pre-trained model performed worse than the best results available for Pascal 2012 images.

As it was implied in AlexNet, the authors found that deeper feature hierarchies tended to learn more powerful features.

Through reading the paper, I became more curious about visualising each output - dissecting the structure and looking at what each layer produces would enable better understanding of the current model that I would use for problem solving. I looked around more to identify these techniques and found that there is a plenty of papers out there. For the next task, I would like to focus on this visualisation by reading through Zeiler et al., 2011 and Selvaraju et al., 2016. In particular, Selvaraju et al., 2016 would be interesting to study further because their approach, Grad-CAM, enables to investigate Resnet-based models.