The data set used in this NN example is based on THE MNIST DATABASE of handwritten digits.

Basic points of this NN implementation

The implementation of the neural network is done through matrix calculation for each batch.

While an element-wise multiplication is used in some cases, a dot product is mainly utilised during the forward and backpropagation process where two examples in a batch need to be multiplied and added together.

With the MNIST data set, input matrix’s first dimension is a batch size (e.g. default batch size used is 20 in MNIST). Input matrix’s second dimension is 784 (28x28) representing pixels to make up a digit. The example of the input can be visualised by using the “visualise_individual_data” function in the source code below, displaying the digit in a plot as follow. 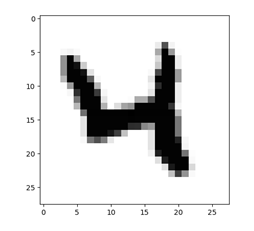 Input values are shuffled so that different digit numbers can be mixed within a training batch. However, a testing set does not get shuffled. Without standardising input values, the learning process is too slow. Thus, input values are standardised around mean 0.0 and standard deviation 1.0 for each batch prior to forwarding through the network.

A function to reduce the learning rate as the epoch increases is implemented to ensure that the gradient steps are reduced when it is closer to the optimum. Output labels are vectorized through an one-hot encoding method to compare it with the prediction and obtain accuracy.

The implementation of NN class

The NN class is implemented with:

As this NN class consists of only one hidden layer and one output layer, a forward function is quite straight forward.

Activation function in this case is a sigmoid function:

Backpropagation uses a chain rule to step backward and adjusts weights and biases of the current NN layers. The example of the chain rule implemented is:

When the formula is implemented with codes, it does not look too bad.

To apply a chain rule here, the beautiful derivative of a sigmoid function needs to be defined as:

Initialisation of weights and biases of NN class

Before starting to train, we will need to initialise weights and biases of a hidden layer. There are two initialisation methods implemented here: 1) Random initalisation; and 2) Kaiming initialisation.

Random initalisation is set with mean 0.0 and standard deviation 1.0.

Kaiming initialisation has an additional step by multiplying √(2/(input size)) to each randomised weights.

There are two loss/cost functions that are implemented: Quadratic and Cross entropy.

Results of a small neural network on the MNIST data 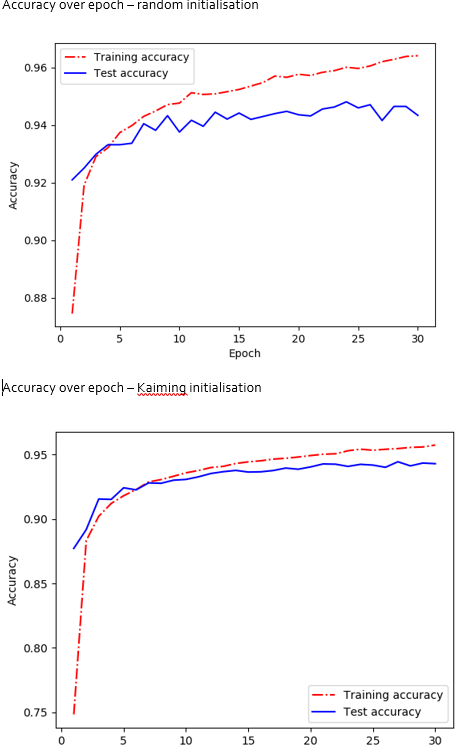 When lr is 100, the network performance does not improve better than that of the smaller learning rates for both models. 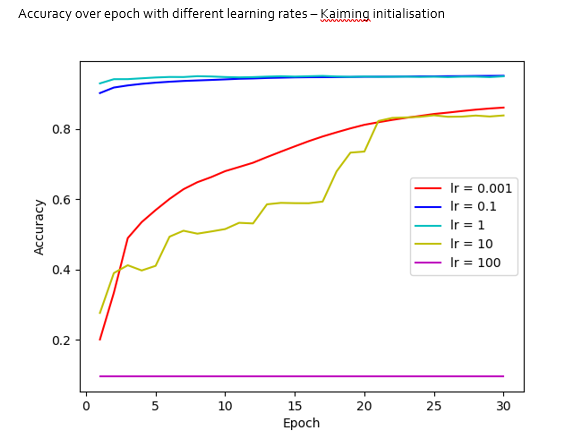 Lr of 100 performs terribly because the network cannot perform the gradient descent properly. With the too large learning rate, the model’s convergence cannot be made as it only goes back and forth near the similar points instead of descending towards the optimum. 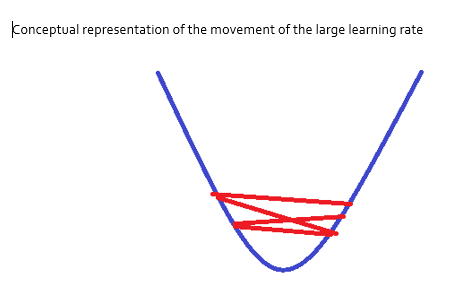 Without increasing the number of nodes in a hidden layer, the maximum accuracy is 95.74% with epochs=30, lr=1.0, bs=20, and lr decay with the cross-entropy cost function.

Overall, it seems to be important to identify appropriate hyper-parameters for a given data set and a model for a task through experiments.

For the mnist dataset, the neural network with one hidden layer and one output layer performs better with a cross-entropy cost function, Kaiming initialisation, learning rate decay, and the settings of epochs=30, lr=1.0, bs=20, and hidden nodes=90 in my experiments.