The purpose of this project is to find curved lane lines where more challenging road situations exist, such as presence of shadows and plenty of brightness as well as other obstacles (e.g. bridges). The pipeline developed is tried on the road from still images and a video stream.

The four additional efforts are made to improve a lane line detection efficient and more robust in this project.

There are 8 steps gone through to identify lane lines:

To undistort an image, finding corner and calibrating camera from a 3D to 2D image and undistorting the image with the camera matrix found from the previous steps. To do so, a chessboard image is useful because it is easy to:

This steps are outlined in the ‘create_object_image_points’ function.

Corners found and drawn on a chessboard 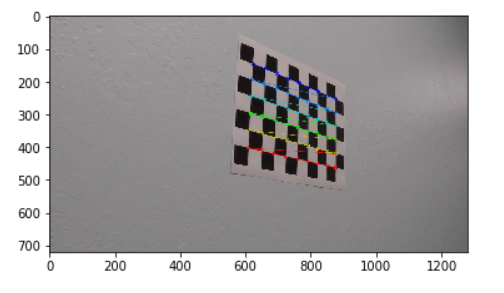 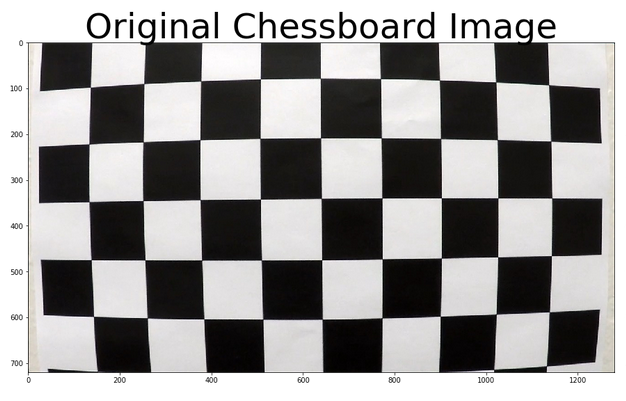 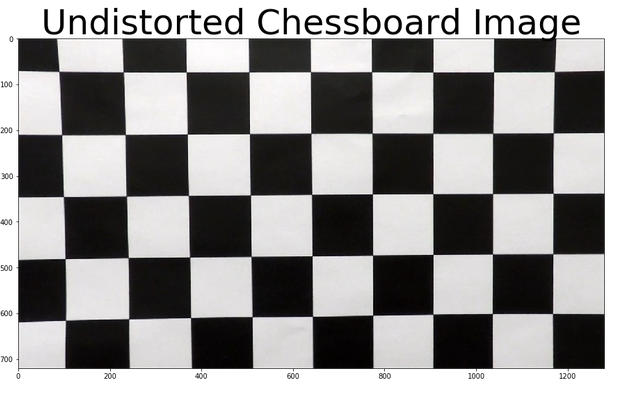 This undistortion is applied to the view from a car below. The undistorted image looks almost similar to the original image but there is a slight difference, in particular, where you look at the car’s bonnet is located. 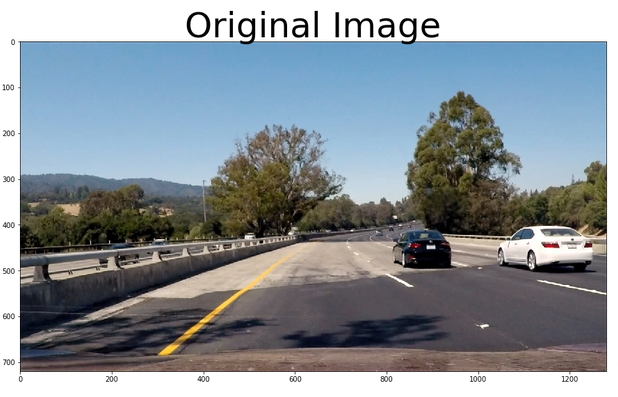 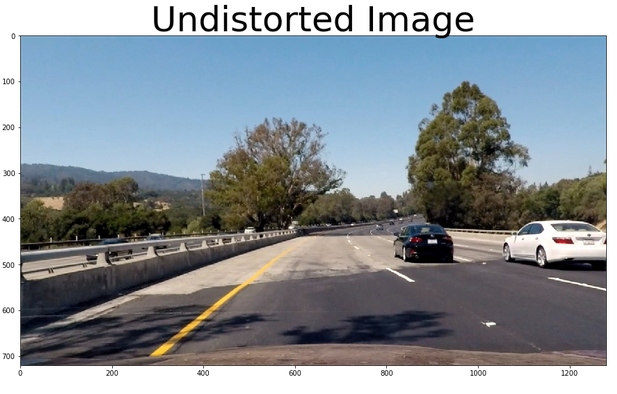 Thresholding combination of Grandients and Colours

The ‘find_sobel’ function below returns the maginitude changes of either x or y gradients. 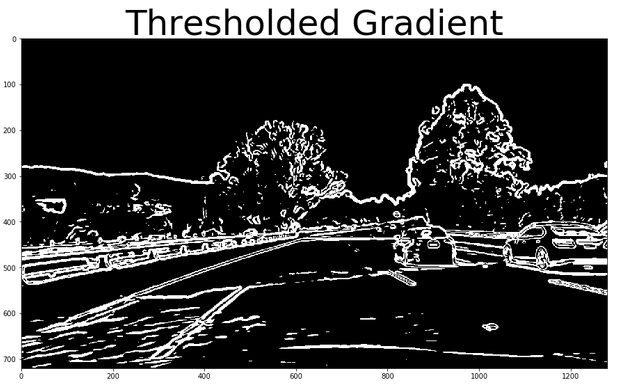 When a sobel kernel size 3 is used, more refined lines are shown. 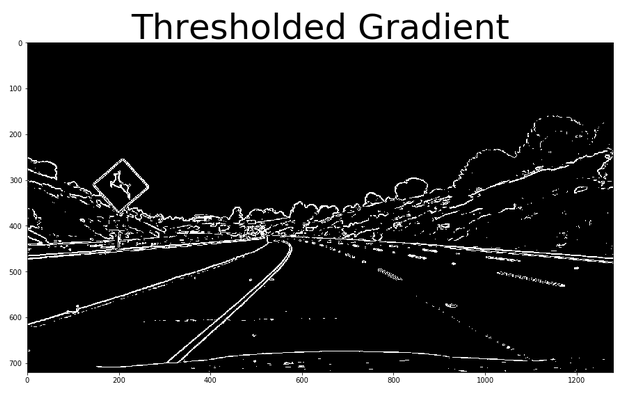 A direction of gradients can be calculated through a arctan function. This function alone does not return clear lines. In fact, it is quite noisy, but it helps to identify lines on the ground only. 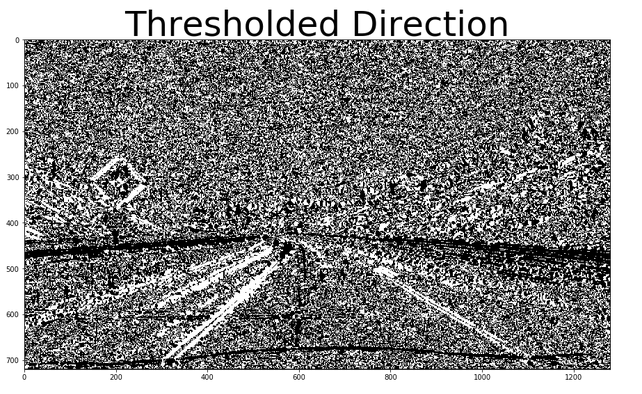 All these efforts to differentiate gradients are combined through the ‘combine_threshold_gradients’ function, which provides the following binary image: 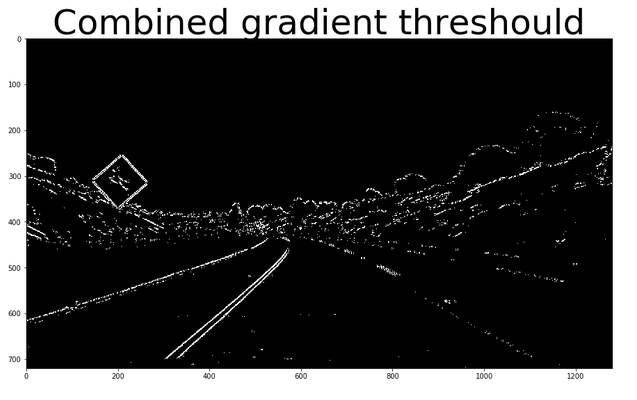 I am selecting test image 4 as it has a large spot for excessive brightness within the image to make a lane detection task difficult.

As seen below, the ‘R’ channel binary shows a large white spot towards top left.

The ‘find_hls’ function seperates ‘saturation’ channel and it does a great job in separation lines.

‘Hue’ and ‘Lightness’ channels are noisy due to a bright area presented in the image.

Lightness of ‘L’ channel helps to detect scarce white lines on the right side on the test images.

These four colour thresholdings, channel ‘G’, ‘S’, ‘L’ and ‘B’ are combined together in the ‘combine_threshold_colour’ function.

Combining gradient and colour thresholding together

I placed extra efforts to think about transforming perspectives. I thought that the original process of looking at each image mannually to transform perspectives can be improved. Thus, I experimented how to get the correct identification of four source points of the current lane that the car is located in, and decided to utilise what we have learnt previously.

My goal is to identify four coordinates for the current lane algorithmically. Therefore, I used the process of identifying lanes through a region-of-interest mask, Hough transformation and interpolation methods.

With this method of the trapezoidal detection, I don’t really need to draw the lines manually. Visualisation shows that the process is working as intended. 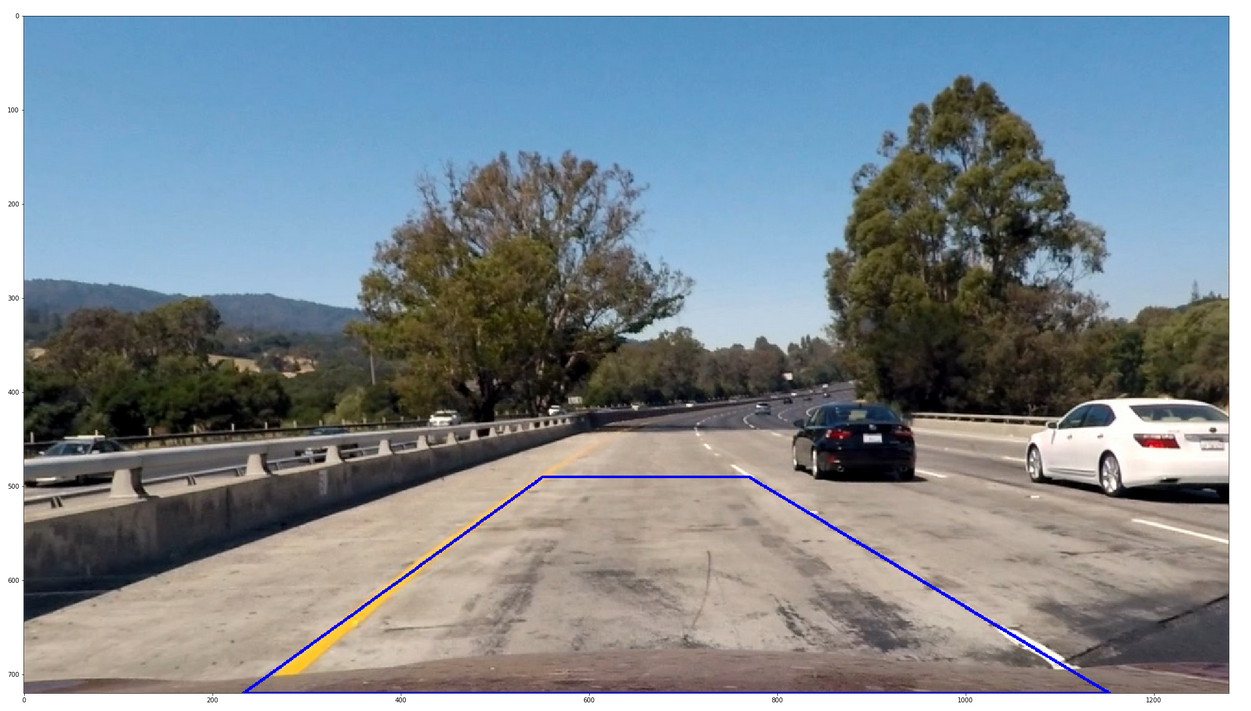 This shape becomes a rectangle once it is warped - from a bird-eye view. The unwarped image is also compared below.

Find lines from the transformed image

To find left and right lanes systematically, I will go through three steps:

As seen below, on the left side, lane pixels found confidently. However, on the right side, there is a trace of pixels on the bottom only. This is because the right side lane scarecely present in the original warped image. It is indicated that a certain form of interpolation method must be incorporated for a video stream in order to detect right side lanes reliably. 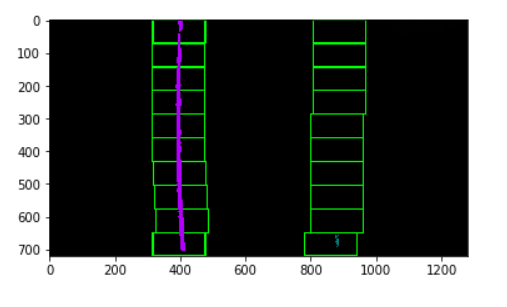 The method to measure curvature is described below. Because the image does not represent the real size of the world, it is important to convert image x and y coordinates to the real world size.

It is expected that the distance between lanes are decreased when the y position moves from bottom to up - in a trapezoidal shape.

There are two sanity check points that we could try.

Example of the results

The ‘finding_curved_lanes_pipeline’ function encompasses the step-by-step application of a lane detection approch. This pipeline is applied to each image in the test folder.

The lane areas are reliably drawn for each of original image. However, I expect the streams from the project video to be more challenging because there are many frames that require attention to shadow, brightness and greater curved areas.

Pipeline description for a video

1) Once the lanes from the first image capture are located, the information from this process can be used to identify the next frames of the same video.

2) The trapezoidal shape identification is also averaged so that curved areas or lanes with bright spots are not sensitive towards outliers.

3) A new detection of the lanes are added to the mean of the previous lane lines with the weight to avoid jitter in a stream.

The sample result for the project video is prepared below:

Limitation and opportunities to improve

To avoid a manual detection of a trapezoidal area for a warped image, using previously-learnt knowledge, that is, masking, Hough transformation, and interpolation is utilised. However, because of this automatic detection, if an area is too shadowy or bright, the trapezoidal shape becomes unusable. To mitigate this, averaging the fitted straight lines has been adopted. However, this seems to be still shaky when there exist large bright areas with a strong curved lane line.

To avoid jitter, second-order fitted lines are also adopted. This requires some degree of hyperparameter tuning such as changing the number of previously-detected lanes or source points for calculating means and experimenting with various weights for the average. Therefore, these parameters may be specific for the particular videos. Identifying an approch where the method is less sensitive on a specific training video would be a next step forward. This opporunity will be addressed soon because the next lessons are associated with applying a deep learning approach to our vision problems reducing manual assigination of hyperparameters (though there may be other hyperparameters, for example, learning rate and momentum value) to experiment with).